Although brief, a few days in Moresby was a breath of fresh (debatable) air after a long three years of not visiting. Touchdown on the tarmac was followed by a lengthy but interesting tour of the miles and miles of new roads built around the city as well as a visit to Koki Fish Market. The multitude, quality and price of Koki is unbelievable. The market is built over the water so the fish is literally straight from the sea to the stalls.

Delighted with the produce

In fact, the whole marketing scene in PNG is unreal. The produce is fresh, the price makes eating your vegetables or fruit incredibly feasible and attractive, and frankly… the people selling the produce are inspiring.

This little cutie was looking after her mum’s ginger stall

The joy of pit-pit 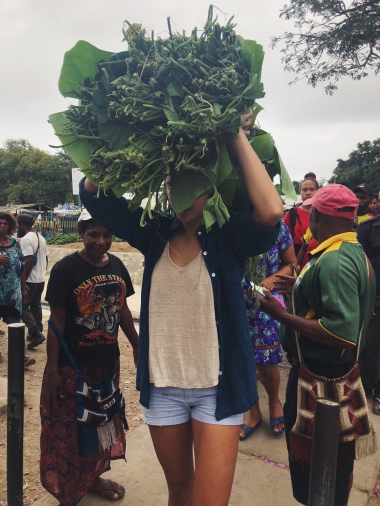 Nunnie carrying our greens much to everyone’s admiration

Labour is on a whole other level for market sellers despite the foolish appearance the job gives of sitting around all day. I thought the bag full of produce I was carrying was heavy, and was instantly ashamed once I saw this man.

There’s no doubt that I take a lot of things for granted in Australia, such as the simple luxury of having a car. Not that the public transport system doesn’t function in Moresby, in fact, even if it literally doesn’t, they’ll make it work.

The scenery outside of Port Moresby in the central district is tough, but just beautiful. My grandfather is buried on a hill overlooking the valleys and blue mountains.

Mountains in the distance behind the clouds 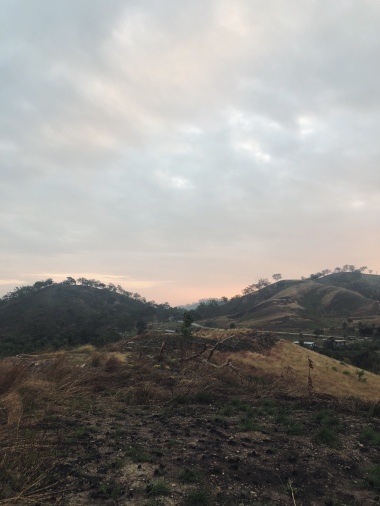 What I’ve never really picked up before this trip however was the constant presence of people throughout the day. On the street, in your yard, or just when you head out there will always be a few family members chilling or willing to tag alone. Even though this isn’t typical in Australia, you get used to the company without even realising… except when each family member adds on another 10 errands to run before heading home which just feeds the stereotype of island time.

But I mean, if running those errands means being hit with the odd spectacular view of the land of the unexpected, that’s ok. Lukim yu PNG. 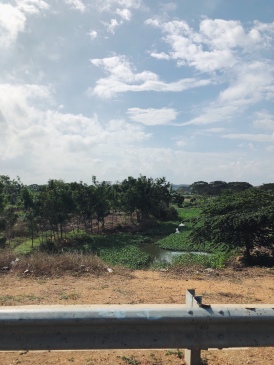 4 thoughts on “The Capital”